Git is a cornerstone technology for anyone looking to improve the efficiency of their development team. It can help improve code quality, expedite release schedules, and reduce development costs. Without a Source Code Management (SCM) tool such as Git, developers are handicapped while the competition continues to innovate.

Even monolithic technologies such as Oracle BI (OBIEE, OAC, BI Apps) can benefit from an SCM tool. Many articles have been written on how this can be accomplished, and many tools exists which facilitate the use of Git for OBIEE developers. However, Git brings some of its own problems to the table, especially in the case of Oracle BI. The chief of which is how to manage the RPD.

Of course, the RPD can be managed with the OBIEE MUD/MUDE process, but this process is not applicable to other workflows. The RPD development workflow with Git is exactly the same with any other artifact, making it simple to translate to other artifacts.

Impressed? Reach out to see how we can make your team experts too:

The crux of the problem comes from how the RPD file is represented. In its default state, an RPD is a binary file – something which Git has trouble working with. A simple workaround is to save the RPD file as the only other supported format, MDS XML, but this comes with its own host of problems. The long and short of it is — there are many ways and many workarounds, but none are really perfect.

Our approach seeks to be the one perfect solution to this problem. Better yet, it’s free and open-source. But before we get into it, how does it work?

Git has the ability to be extended with custom merge drivers. A merge driver is basically a piece of code which tells Git how to merge (or combine) files of a specific type. Since the Administration Tool can be used in a “headless” mode, and can perform RPD merges itself, it’s possible to actually configure Git to offload the merge responsibilities to the Administration Tool.

This is where you may want to send this article to your developers, as it starts getting a little technical.

Configuring Git with custom merge drivers isn’t too difficult, you just need some scripting knowledge in the language of your choice. Lucky for you, we’ve already done the heavy lifting. We’ve developed a custom merge driver and its available as open source:

All you have to do is the configuration. Don’t worry, we’re here to help with that too.

There are several methods for configuring custom merge drivers. We’ve found this way to be the most flexible and powerful.

The process below isn’t too difficult but be sure to pay special attention to any parameters that need to be updated for your environment — specifically, passwords and paths.

Also, since the Administration Tool is Windows only, this plugin only works for Windows, and thus the steps below are on a Windows environment.

Git should now be able to handle the rest! Let’s test it out and see how it works.

Let’s start with what our Git repository looks like. Of course, we have our RPD file, GCBC12c.rpd, as well as our previously created .gitattributes file.

I’ll open the base RPD to show what’s currently in it. I want to keep these examples simple, and really all the effort is being performed by the Administration Tool, so it isn’t anything we haven’t seen before.

As you can see, our initial RPD has nothing in the Presentation Layer. 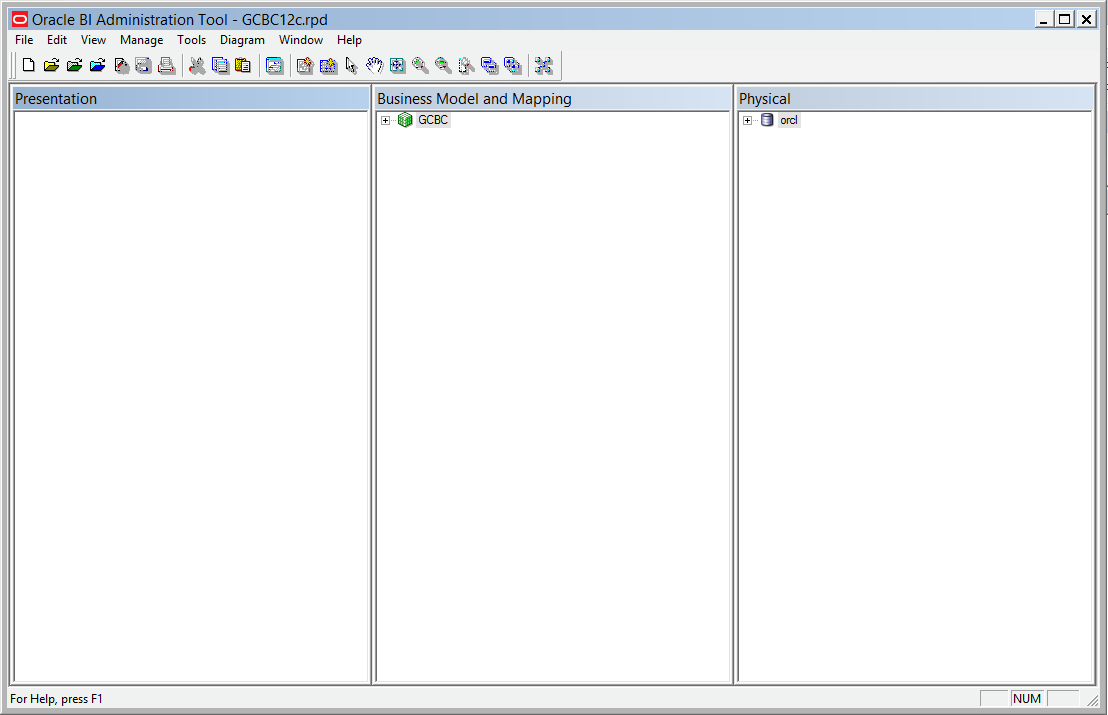 Like I said, simple. Now let’s see what the RPD for one of our branches looks like. 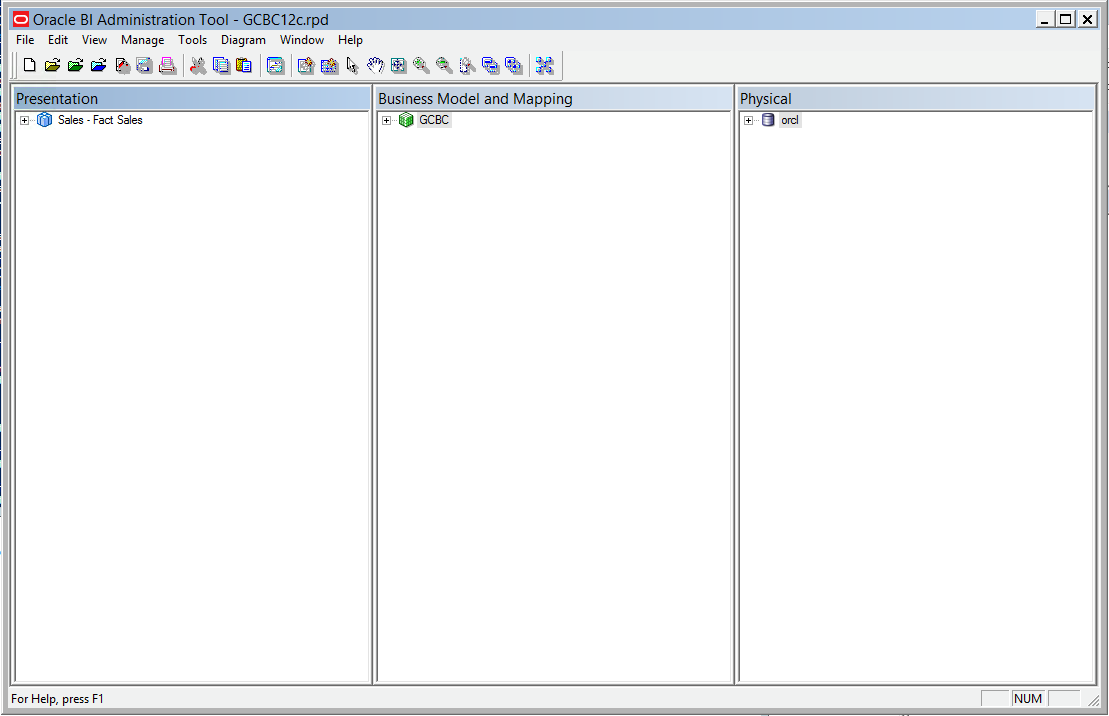 In the other branch, we’ve built a different Subject Area. 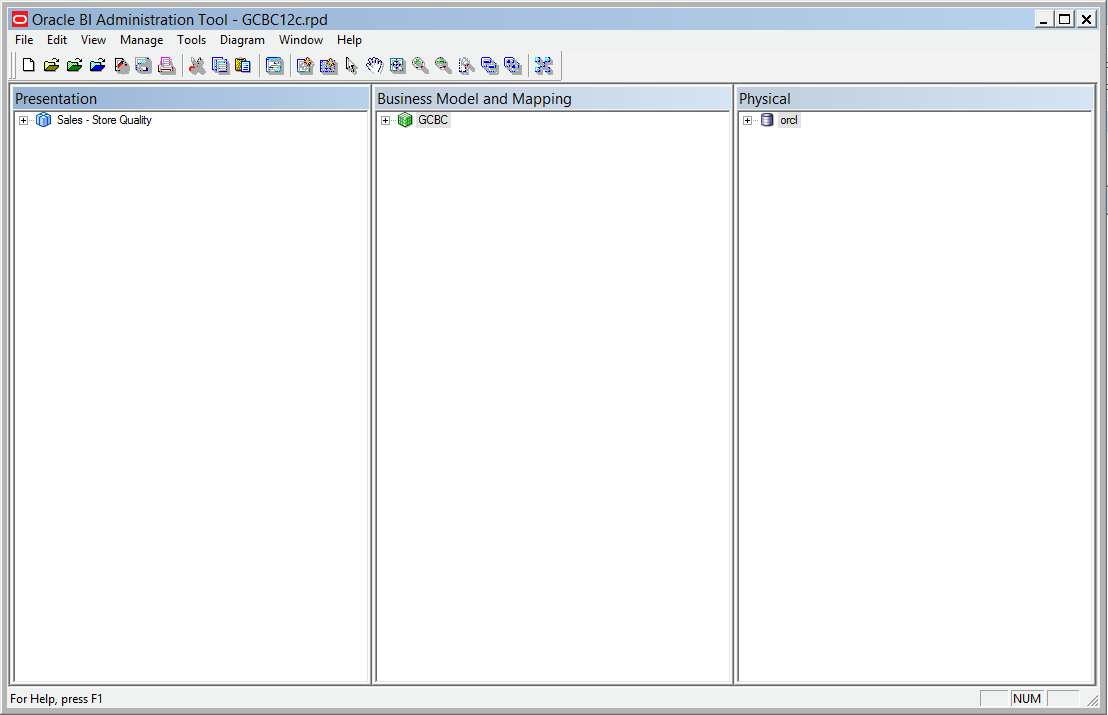 The first merge won’t open the Admin Tool. That’s okay, don’t fret. Git is smart enough to know the main branch hasn’t changed, so it knows it doesn’t need to perform a merge, just a replace.

Now, when we merge the second branch is where Git needs to perform the RPD merge (since the base has changed).

Our configurations now tell Git to, instead of trying to merge an RPD file itself, use our Python script. Our Python script then opens up the Administration Tool, provides all the information it needs, and performs the merge for us. 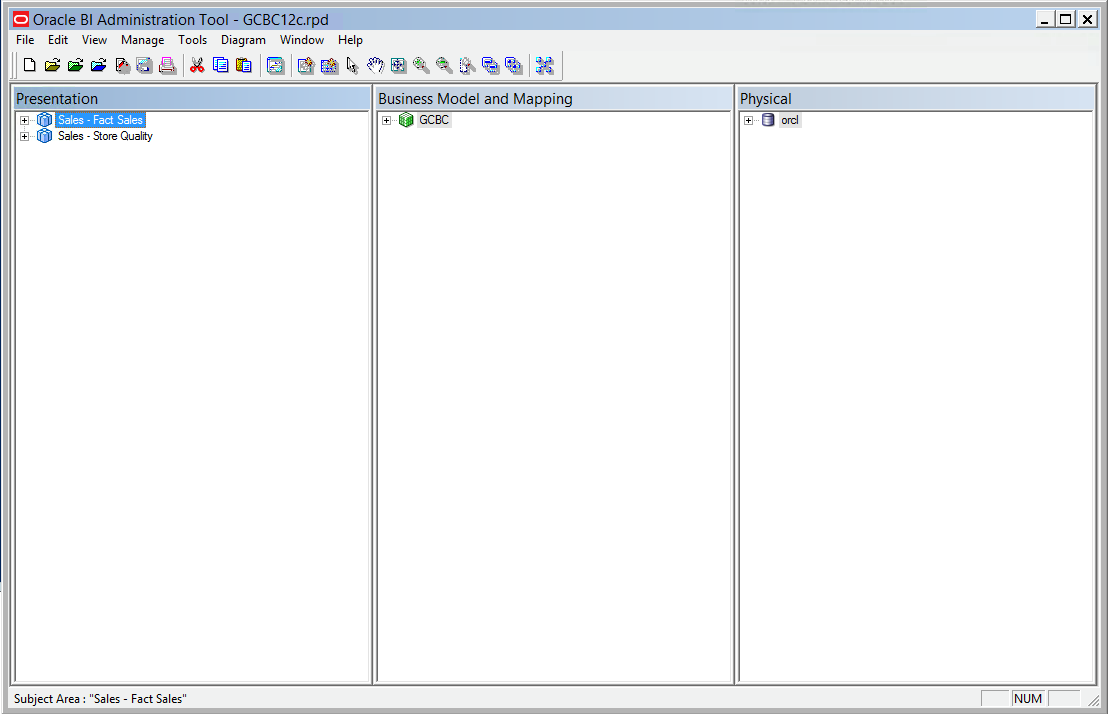 An RPD which is the combined result of the other two RPDs. Screenshots don’t do the process justice, though. Let’s see it in real-time:

Now that we see how easy it is to use, let’s take a closer look at what this approach affords us, as well as what it costs.

There are many techniques and approaches to performing an RPD merge in the OBIEE development process. From the MUD process to working with an RPD in Git, the important thing is to decide on an approach that works best for your organization. The approach shown above provides the most flexibility, while also being the most reliable, but with the typical costs of using a binary RPD file.

Empowering developers with Git shouldn’t be scary, it should be exciting. Contact us to see how Git can help empower your developers and your business. 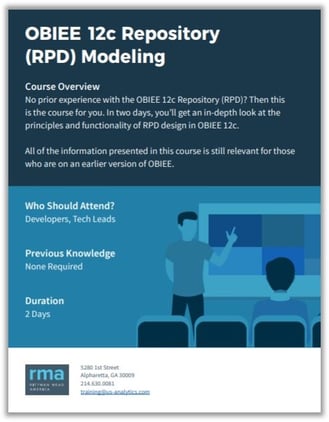 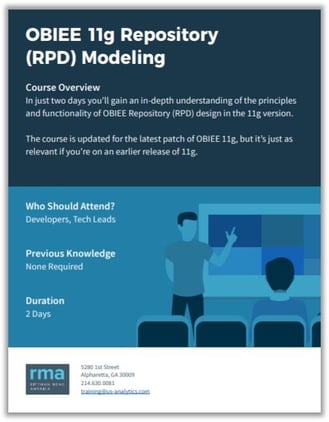