OAS, OBIEE, and OAC: What's Changed and What Hasn't | US-Analytics

Oracle Analytics Server, or OAS, was released January 31, 2020, and with it came a lot of questions from active OBIEE users. One question that’s been posed repeatedly is “What’s the difference between OBIEE and OAS (and where does OAC fall)?” So to answer that, in this article we’re taking a look at what sets OAS apart from both OBIEE and OAC.

And for help deciding whether or not a move to the cloud is right for your organization, read our free eBook on moving to the cloud versus staying on-prem. You can download it by using the button below or to the right.

OAS is a robust on-prem analytics server with top-of-the-line features like ad hoc analysis and interactive reporting, a fully-functional mobile application, and interactive dashboards. It also includes the following programs:

OAS was developed to replace OBIEE 12c, and current and active OBIEE users can easily make the switch to OAS because they’re automatically licensed to do so. This decreases friction during the transition between the two products.

But even though OAS is OBIEE’s replacement, that doesn’t mean that they share all of the same features. There are some key differences between OAS and OBIEE that are worth understanding before you make the upgrade.

For instance, the Scorecard and Strategy Management feature from OBIEE is desupported in OAS, meaning that Oracle no longer fixes bugs related to that feature and could remove the feature entirely.

There’s also a whole host of OBIEE features that Oracle has categorized as deprecated, which means that they won’t be enhanced in the future but will be supported for the full life of the OAS 5.5.x release. These features could also be desupported in any upcoming major release.

Deprecated features that may be desupported in the future include:

*These features are disabled by default

After reviewing the numerous differences between OAS and OBIEE, it might seem as though Oracle simply duplicated their OAC product for on-prem users. But there are a few minor differences between the two products, aside from the fact that one is on-prem and the other is in the cloud.

According to Oracle, OAS was released with most of the features of OAC, with a few notable exceptions. Most prominent among these exceptions are data replication and natural language generation. The features that the two products have in common are significantly more numerous. Some of these common features include:

OAS also shares a commonality with OAC in that it gives you access to your data no matter where it’s sourced from Oracle databases, applications, third-party data sources, or even .CSV or .XLSX files. For a full list of connectable data sources, check out these resources from Oracle on supported data sources (RCU Schema and Visualizations, Reports, and Dashboards).

OBIEE users will recognize OAS and its functionality, although some features have been removed or will soon be desupported and removed. Overall, OAS seems to be more similar to OAC than to OBIEE—and that’s intentional, as OAS was developed to help on-prem customers transition to the cloud with less stress. 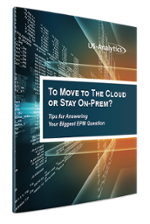 OAS, OBIEE, and OAC: What's Changed and What Hasn't
Hyperion Financial Management (HFM): Deciding on Your Next Steps
Upgrading Hyperion Soon? Document These 4 Things
Is the End Nigh? What's Really Going On With Hyperion On-Premise Support

Thinking about taking your data to the cloud? Check out our free eBook "To Move to the Cloud or Stay On-Prem" for help determining your next move.

Get The Free Ebook
Copyright © 2020 US-Analytics. All rights reserved.