Poor performance tends to come up a lot when people talk about OBIEE. It’s a definite source of frustration, especially when finding the root cause of performance issues is no simple task. But things can get better — you just have to know where to start.

This blog post can act as a starting point to solving your performance issues. In it, we’ll tell you about several factors that might be affecting your OBIEE performance and we’ll even offer you several solutions.

It can be extremely difficult to pinpoint what’s causing slowdowns and poor performance in OBIEE. If you’re attempting to improve performance, and you don’t know where to focus, you’re going to end up wasting a lot of time.

Using large datasets is a common issue associated with poor OBIEE performance. At any point in time, you’re probably experiencing poor performance because of the large amount of data being pulled through OBIEE. But you can’t stop users from making queries, so how do you fix it?

You first need to look at your Record Utilization Ratio. When this number is low, you’re experiencing inefficient data retrieval. If you improve your ratio, you’ll find your queries will use fewer resources.

To discover a method for improving your Record Utilization Ratio, check out the OBIEE performance webinar: 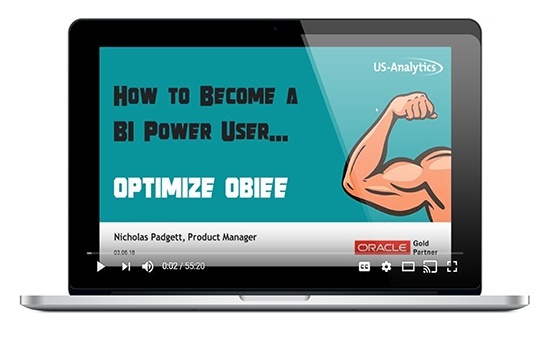 If your OBIEE performance is already great, but you’d like an enhancement for even smoother sailing, then using the BI Server cache is something you should consider. Unfortunately, this is not the case for many.

If you have a poorly built system and you’re frustrated by poor performance, you might be tempted by a band-aid solution. The problem is, a band-aid is not a substitute for stitches. In the long run, BI Server caching can’t fix the root of your problems. The only way to do that is to find out why and where something went wrong.

However, once you understand the root cause of your performance issues and fix them, you might consider BI Server caching. It can help improve response times of OBIEE dashboards by using data already in the cache — thus reducing the load on the database, network, and the BI Server.

To find out more about enabling and managing BI Server caching, check out the eBook.

4) Not Knowing When Performance Issues Occur

This one may seem obvious, but with OBIEE performance, nothing is obvious. The problem with not knowing when something goes wrong is that a user has to experience the consequence before you even know about the issue. Plus, the cause of the slowdown that user is experiencing might be the cause of several things going wrong.

If you could find out the instant something goes wrong, then you could fix it before the user experiences the pain. That’s completely possible now with OptimizeBI, a tool that instantly notifies you of performance-related events involving...