The Septemer updates for Oracle's Financial Consolidation and Close Cloud Service (FCCS) are here! This blog post outlines new features, including a toolkit for Hyperion Financial Management (HFM) migration to FCCS, drilling down from summary members, considerations, and more.

The monthly update for FCCS will occur on Friday, September 21 during your normal daily maintenance window.

Users can now run the consolidation process, in addition to Power Users and Service Administrators. To consolidate data, you must also have Write access for the entity that you want to consolidate.

When you load data to YTD_Input and use the Replace mode, the system loads the data and then reverses the YTD values for the Flow accounts that are not specified in the data load file.

In a further effort to simplify how you manage administrator settings, administrators can now define all application settings and system defaults in one place in the application. For example, from the Home page, select Application, and then Settings to set email options, assign an owner to an application, or to enable currency options.

The time format used throughout Oracle Financial Consolidation and Close Cloud is now based on the time zone setting that you specify in User Preferences under Tools.

In Supplemental Data, you can set governors on the maximum number of Data Set Calculated and Dimension attributes to improve application performance. The system provides default settings, which you can decrease or increase up to the maximum value. It enforces the maximum limits when attributes are created.

Note: The Viewer role is optional. If you have existing Close Manager users with the User role, it is not necessary to reassign them.

EPM Cloud Migration Accelerator is an Oracle utility and whitepaper providing best practices for migrating HFM customers to EPM Cloud. The current version allows migration of Hyperion Financial Management 11.1.2.3 and 11.1.2.4 applications to EPM Cloud. The EPM Cloud Migration Accelerator combines software as well as best practices/recommendations for moving your HFM applications to the Cloud. This holistic guide identifies the recommended approach for every step of the process and helps facilitate a clean and smooth transition.

A new version of the EPM Automate Utility is available with this update. This version includes the following commands:

Data Management now includes an incremental file adapter to optimize the data load process. The new Incremental adapter compares the source data file with a prior version of the source data file and identifies new or changed records and loads only this data set. The user has the option to sort the input source data file before making the comparison or they can provide a pre-sorted file for better performance.

Drilling Down from Summary Members

You can now drill down from Summary level grid members and view the detail source data that make up the number.

In order to use this feature you should select the Enable Summary Drill option in Data Management. After enabling this option and loading the data with Create Drill Region option set to Yes the Drill icon will be enabled at the summary level. Drill is limited to 1000 descendant members for a dimension.

The following changes that affect provisioning are included in this update. 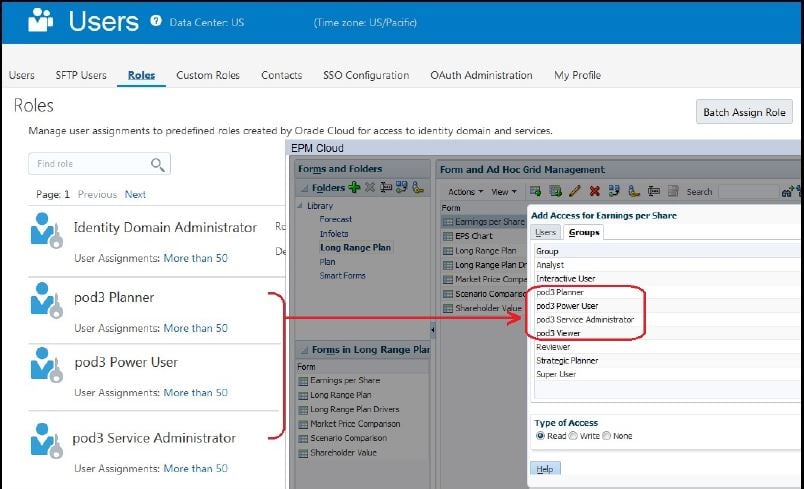 NOTE: The proposed change will not affect how you create and manage groups or use them for application-level access control.

Some of the Simplified Dimension Editor errors (cells outlined in red) are false-positive errors (i.e. incorrectly reported as errors).

Data Storage errors for the following members should be ignored:

When you create a Translation Override rule, redirection does not work properly when you use a shared Parent account for the Source. Workaround: Specify the primary Parent account.

Seeded dimension members must have the Consolidation Operator set as Ignore. None of the POV members should be set to Dimension member. Rather, always use Top Member to view aggregated values.

When you change Ownership Data that uses a Consolidation rule and then consolidate, the Calculation Status is not correct for the partner and entity.

The Data Storage property has changed from Dynamic Calc to Never Share for these rate accounts in the Rates Cube:

Additionally, due to a change in calculation for Opening Balance for Retained Earnings Prior, you may require reconsolidation of existing data if Opening Balance Adjustment entries have been made, but not otherwise.

Also, enabling the Ownership Management feature requires a reconsolidation of existing data in order to populate the Proportion member of amount in the Consolidation dimension.

If there are conflicts with aliases of existing members, an error is displayed that the system cannot enable the feature.

Resolve the member alias conflict, refresh the database and then enable the feature. When the Ownership Management feature is enabled, you will need to reconsolidate all existing data in your application in order to re-populate the Proportion member in the Consolidation dimension.

In Internet Explorer, you may experience issues using the Open Summary dialog in Smart View. To work around this issue: