The monthly update for PBCS and EPBCS will occur on Friday, November 17 during your normal daily maintenance window.

Changes to CSV Version of the Provisioning Report

This monthly update reverts the changes made to the CSV version of the Provisioning Report in the September monthly update (17.09) so that it now lists the application roles that are mapped to the predefined identity domain roles assigned to users. It also lists the groups to which users are assigned, even if the group is not assigned to any role. For example, if the user is assigned the Service Administrator role, the CSV version of the report lists one row for each application role mapped to the Service Administrator role.

If you're planning at the weekly level in the Financials business process, when you enter monthly level exchange rates in the Global Assumptions configuration task and save the form, the monthly exchange rates are copied to the weekly level. The copy is based on how you mapped weeks to months (4-4-5, 4- 5-4, or 5-4-4). This functionality applies to the Financials cube (OEP_FS) only.

You can now create and edit Dataviews in Strategic Modeling on the Web. In the Account View, from Actions menu, click Dataviews.

For applications of type “Enterprise” (available with Enterprise PBCS or PBCS Plus One licenses), you can now write a groovy rule that moves the input and calculated data from source cube to target cube by either executing a Data Map (for administrators) or Smart Push (for users who have launch access to the rule).

This change affects only Planning and Budgeting Cloud Service customers who activated their subscriptions on or before July 31, 2016.

The Simplified Interface, an option available in the service since November 2014, will be established as the standard across the service. As a result, the current Standard Interface, which is also known as the Enterprise Planning and Budgeting Cloud Workspace, will not be supported starting with the December 2017 update to the service (December 1, 2017 for test instances and December 15, 2017 for production instances). After the deployment of the November update to production instances on November 17, 2017, bugs or enhancements for the Standard Interface will not be addressed.

Oracle is committed to providing a simple and intuitive user experience. To achieve this, Financial Reporting Web Studio, available since March 2016, will become the only environment for designing and building reports.

Oracle recommends that you transition to using Financial Reporting Web Studio at the earliest opportunity. Please send questions and concerns to Oracle using the Provide Feedback option in the service.

Future releases of Mozilla Firefox will be phasing out support for XUL-based add-ons such as Smart View. Starting in mid-November 2017, only add-ons and extensions built with new web extension technology will work in Firefox. Therefore, Smart View 11.1.2.5.710 only supports Firefox versions up to ESR 52.4.1. If you want to continue using Firefox with Smart View 11.1.2.5.710, do not upgrade your Firefox browser.

If your Firefox browser is set to automatically install updates, Oracle recommends changing the setting to “Check for updates, but let me choose whether to install them.” See the Firefox help for instructions on changing this setting.

To learn more about the simplified interface vs. workspace, watch the webinar replay... 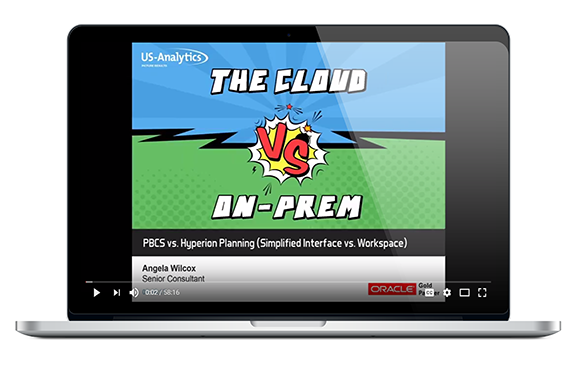