New features and updates for Oracle's Account Reconciliation Cloud Service (ARCS) have finally arrived! In this blog post, we’ll outline new features coming to ARCS in May, including loading journal entries, as well as viewing audit reports and period history.

We’ll let you know any time there are updates to ARCS or any other Oracle EPM cloud products. Check the US-Analytics Oracle EPM & BI Blog every month.

The monthly update for Oracle ARCS will occur on Friday, May 17 during your normal daily maintenance window.

System Administrators and Power Users can now perform a bulk update of teams and members, rather than having to update teams and members individually. You need to create an export a comma separated value (csv) file, and when you are ready, you can import the information back to the application.

Data Management and Account Reconciliation have increased the number of Attribute columns to which you can import values to 40. Each attribute column can now accept up to 300 characters.

Exporting and Importing of Match Types Across Environments

System Administrators can now export the configuration of a Match Type, and then import it using one of the following options:

The Academy has been updated to reflect recent changes in the software user interface and functionality as well as current videos.

A Status column has been added to the Unmatched Transactions screen to indicate the current status for each unmatched transaction: New or Supported. You can also select both options through the Filter to select All. if you select All for the status, both the New and Supported icons display for that transaction. There is no separate All icon.

Previously, only Periods could be viewed on a report. With this release, in addition to Periods, a new auditing dashboard is available. This Audit Report enables you to see any changes made to the service for the following objects:

Administrators can now view the history of all objects in one place, as well as filter the history by any of the attributes.

The Ending Amount for amortizing transactions must result in a 0.00 balance; otherwise, an error is displayed. You must manually correct the transaction to render a zero ending balance. Existing non-zero balances will be preserved, but if you edit the transaction, you will need to zero them before the changes can be saved.

Data Management can now be used to load exported journal entries created in ARCS to a Transaction Matching target application.

You can view a history of all actions performed on a Period, including the dates, and the old and new values.

A new version of the EPM Automate Utility is available with this update. This version includes support for Mac OS and the ability to run multiple sessions of the utility from the same directory. This version also includes new commands ( ApplicationAdminMode and SortMember) and updates to the replay command to support Lagtime parameter and to the ProvisionReport command, which now, by default, generates the simplified version of the Provisioning report instead of the classic version. You must install this version of the utility to use these enhancements.

Removal of Support for Transport Layer Security Protocol 1.0 and 1.1

As announced in previous readiness documents, starting with this update (Release 19.05) to EPM Services, Oracle will support only Transport Layer Security protocol version 1.2 (TLS 1.2) to communicate with EPM Cloud. To ensure the highest level of authentication and data encryption security, TLS 1.0 and TLS 1.1 will no longer be supported after your environments are updated on May 3, 2019.

Note: Support for TLS versions 1.0 and 1.1 will be removed for both your Test and Production environments on May 3, 2019.

After TLS 1.1 is deprecated, you cannot use client operating systems that do not support TLS 1.2 (for example, Red Hat Enterprise Linux 5 and Microsoft Windows 2002) to run operating system-specific commands (for example, code to run cURL tools to transfer data and custom code that integrates with the Rest APIs) against EPM Cloud. Additionally, Smart View installed on such systems will also fail to communicate with EPM Cloud. Similarly, you cannot use browsers that do not support TLS 1.2 protocol to access EPM Cloud environments

In a future update, there will be a revised interface with enhanced navigation and a new theme called Sky Blue. 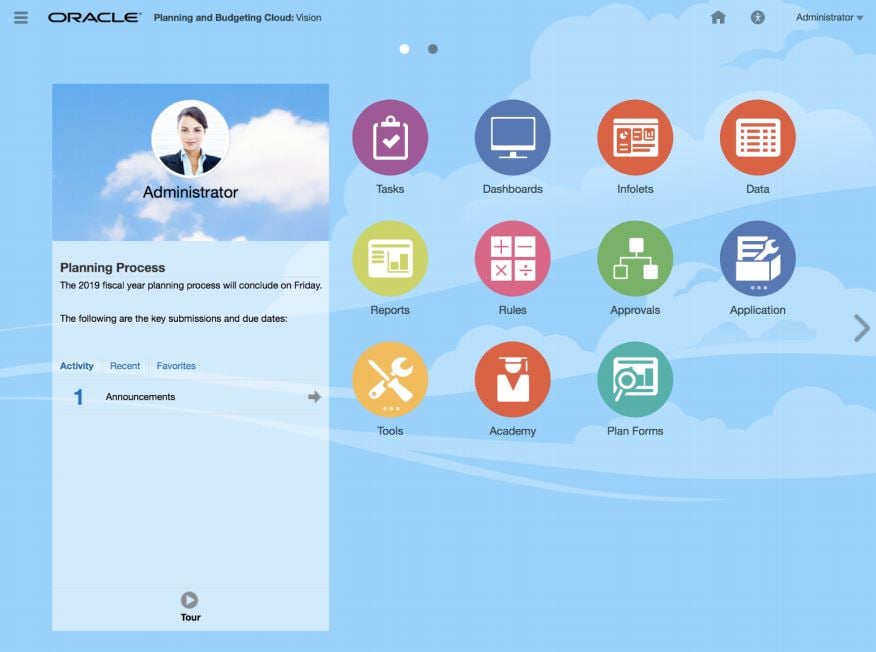 The revised interface retains existing functionality and enhances your Home page experience with a more responsive design. The Welcome panel and the global header readjust after resizing, which means less scrolling. Clearer announcements and notification areas are added to the Welcome panel, as are arrows to help you navigate easily between the Home page and your infolets. A bigger Navigator menu has improved usability, more themes for customization are included, and a bigger work area has more space to maneuver and provide better visibility. The interface is more consistent with other Oracle products, such as Fusion Applications.

After the interface is released, all new customers will use the new lighter-colored Sky Blue theme, and existing customers will keep their current theme. You can switch themes using Tools, and then Appearance.

In the Academy, some pages and icons may appear different in the video and the Cloud service.

It is a best practice to use Refresh within the Account Reconciliation Cloud user interface rather than performing a browser refresh.