When an employee decides to leave, it’s tough on any organization. It’s particularly difficult when that employee is a Hyperion administrator — suddenly you’re left without support for complex applications that are essential to your financial operations.

This is what happened to Williamson-Dickie, a Fort Worth-based work wear outfitter, when their admin decided to leave. But what began as a tough situation ended up benefiting the organization. They realized they didn’t have enough work for a full-time admin — instead, they could save time and money by outsourcing Hyperion support to an experienced support services provider.

In this blog post, we’ll go over some of the ways Williamson-Dickie uses Hyperion support services to support Hyperion Planning. Williamson-Dickie’s support agreement includes both “scheduled” tasks that occur each month/quarter/year as well as “unscheduled” tickets for unforeseen needs.

Below are a few examples of scheduled tasks that the support services team does for Williamson-Dickie:

Ad-hoc support requests are captured by a ticketing system and assigned to the support services personnel. Below are a few examples of unscheduled tasks.

Preparing for the next budget season

As they seek to constantly improve, Williamson-Dickie’s processes are everchanging. The organization uses predefined forms, but as their requirements change, they rely on the US-Analytics support services team to make new forms work.

For example, Williamson-Dickie had roll forward forms to help with cash flow planning. When they realized they had an account that they no longer wanted in the roll forward forms, they called on their support services team. The team went through the business rules, took the account out of the form, and put it back into the main balance sheet accounting form so that they could plan for the account as a normal occurring balance, rather than a roll forward balance.

Other actions the support services team has taken to help prepare for the budget season include:

Williamson-Dickie uses the support services team to manage their metadata, such as adding accounts and custom numbers on a regular basis. The organization sends the team a list, eliminating any worry about the technical aspect of making hierarchies work within dimensions. The support services team also ensures that members are working with the Planning application as well as the HFM application.

As a global organization, Williamson-Dickie faces time zone issues as well as language and experience barriers. Because of these barriers, Williamson-Dickie can’t always troubleshoot user issues themselves — especially when an issue arises at month-end.

The time zone difference makes it difficult for Williamson-Dickie to respond to user errors right away. However, the support services team is able to solve the problem right when it arises, whether it’s with a user in China, Mexico, or North Texas.

For example, when a user was having an issue accessing Planning forms during an important time, the support services team took the following actions:

By opting for support services instead of an in-house administrator, Williamson-Dickie has seen significant cost savings and a breadth of expertise that would be nearly impossible to find in one employee.

“I needed to be able to sleep at night knowing I had solutions to problems,” said Williamson-Dickie’s Finance Group Director. “Forming a relationship with US-Analytics gave us a pipeline into a variety of expertise.”

To learn more about how Williamson-Dickie supports Hyperion Planning, watch the webinar replay! 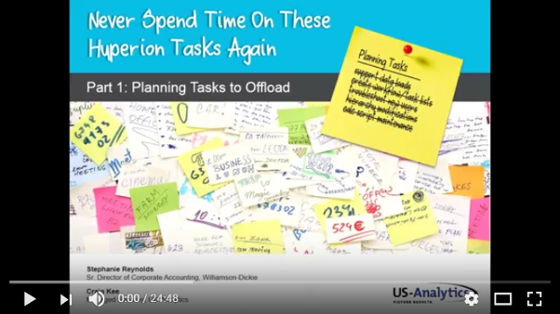 Navigating The New Normal: On-Prem Hyperion EPM During Coronavirus
4 Factors That Affect the Cost of Hyperion Support Services
Finance Leaders, Solve Your Most Pressing Problem by...
The Top 10 EPM Downloads of 2018