FAQ: Oracle Planning and Budgeting in the Cloud

Long-time Hyperion users as well as new faces tuned in to our webcast on Oracle Planning and Budgeting Cloud Service (PBCS), where we talked about common budgeting challenges — long planning cycles, data integrity issues, and lack of transparency, and more. We also explained why 70 percent of CFOs are currently moving their core finance and forecasting processes to the cloud.

The cloud makes world-class planning affordable for organizations of all sizes — especially large, global enterprises wanting to bring their worldwide offices together. Oracle PBCS is based on the market-leading Hyperion Planning application but is optimized for the cloud — meaning there is no up-front capital investment, implementations take weeks instead of months, and automatic upgrades ensure that users always have the latest features.

You can watch a replay of the PBCS webinar here. During this live session, our cloud experts gave attendees the floor to ask their most pressing questions, with topics ranging from migrations to security. We thought we'd share the 15 most common questions we hear to help you decide if PBCS is right for you.

1. How can existing Hyperion Planning customers migrate to Oracle PBCS?

For customers with existing Hyperion Planning applications, the migration path from Hyperion Planning to PBCS is very easy. If a customer is on 11.1.2.3.500 or greater, it is a three-click process: (1) use Lifecycle Management and export the application definition, (2) upload through the automation utility in PBCS, and (3) import it on the PBCS side. Earlier versions may require minor modifications to the XML files for the LCM packet, but we have yet to see a migration that takes more than a few hours.

There are also many part of your on-premises Hyperion Planning application that won't migrate and many files you'll need to adjust.

2. Can I migrate from on-premises to cloud or cloud to on-premises? Is the migration seamless or do the LCMs need to be adjusted before importing to PBCS?

LCM migrations from an on-premises application to PBCS are seamless transitions. However, migrating from cloud to on-prem is not so simple. Many file formats have changed in the cloud, so going from the cloud to on-prem requires a lot of file adjustments.  Since we at US-Analytics have been developing on both PBCS and on-premises Planning, our consultants know the ins and outs of migrating between the different server sets.

3. Does PBCS have the same functionality as Hyperion Planning?

PBCS is now a couple years ahead of on-prem Planning in certain areas — some of which are major. The two applications have a complete different user interface. Hyperion Planning still uses Workspace, while all pods in the cloud no longer have Workspace. The simplified interface is all that's available on PBCS, which has significant advantages. If you want to learn about the differences between Workspace and the simplified interface, we covered it in this webinar — PBCS vs. Hyperion Planning: Using the Simplified Interface.

From an administrative perspective, the cloud environment is significantly easier to administer because you don't have to manage things like server-to-server point communications, logs and tuning, etc.

4. Is there a limit to the number of custom dimensions that can be added to PBCS?

There is no limit to the number of custom dimensions. As with on-premises Hyperion Planning, PBCS allows you to create multiple plan types with their own custom dimensionality as necessary.

6. How do data loads and pushes occur?

PBCS comes with a full set of data integration tools. For those who are familiar with Oracle FDM or FDMEE, FDMEE is embedded directly within the PBCS application. You can do cloud-based data uploads into PBCS and then do any mapping translations that need to occur to load data into the planning application going forward. The latest release of PBCS includes the EPM Automate Utility, a scheduling utility that can help support that process.

7. How do dimension builds occur?

There are multiple approaches to loading dimensions. PBCS allows direct dimension maintenance inside of Smart View; if you have hierarchy definitions that live in an Excel file, you can import them directly through Smart View or apply them. Another way is to load the .csv file directly into the planning user interface. As a third option, you can use the EPM Automate Utility to upload the dimension build files and then kick off any dimension structure changes that need to happen.

8. How would we load ERP source data into PBCS?

9. Is it possible to use a spreadsheet located on the client machine to connect to the cloud application?

Yes. Just like any on-premises Planning application, PBCS can use Financial Reporting Studio and Smart View, enabling you to perform both ad-hoc retrieves as well as perform Financial Reporting for those who want a better visual display of the data.

10. Can the "Planner" role carry out ad-hoc analysis in read-only mode in PBCS?

Yes, this is a common scenario. Users with read-only access have full capability to do ad-hoc reporting.

11. What web browsers does PBCS support?

12. How do we maintain security in PBCS regarding shared services?

PBCS security is not synced with MSAD via connection to the MSAD; it is either manually controlled or imported via .csv for the users who are later provisioned for PBCS. Provisioning is also not performed in Shared Services for PBCS. It is controlled in the Oracle Cloud Identity Console. There is also support for Active Directory integration using SAML.

13. Is there a sample demo of the Oracle PBCS application that we can access?

The Vision application, which is the current on-premises application, can be easily deployed into PBCS for testing in a PBCS environment. Vision is also built into PBCS, so you can deploy it to your own PBCS instance after you purchase it, if you want to play with it.

14. What does a typical implementation plan look like for PBCS? How long does it take?

US-Analytics can help your business get started with PBCS using a proven methodology to ensure optimal results. PBCS Pro is an accelerated deployment customized for your organization and delivered in 8–12 weeks, depending on requirements.

15. Which is best for my organization — Oracle PBCS or on-premises Hyperion Planning?

Both products are highly recommended by US-Analytics. Schedule a quick call with our planning experts to determine whether Oracle PBCS, Hyperion Planning, or a hybrid solution would best fit your needs as a company.

Interested in learning more about PBCS? Watch the webinar replay... 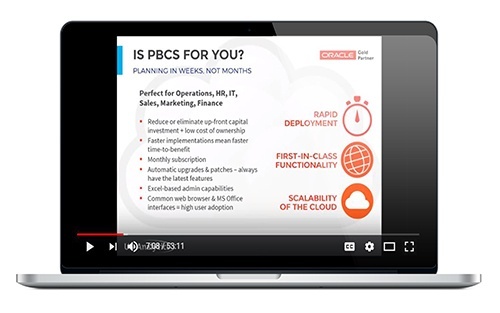 Editor's Note: This post was originally published in August 2015 and has been updated for accuracy and comprehensiveness.