In my previous blog post FDMEE Map Monitor Reports (Finally!), I demonstrated how to enable this new functionality included in FDMEE patch 11.1.2.4.100. The tutorial listed which Map Type and Action were logged and which were not logged concluding with Bug 22526857 - AIF_ARTIFACT_AUDIT TABLE NOT LOGGING ANY CHANGES FOR EXPLICIT AND MULTI DIMENSION, which was provided by Oracle Support based on an SR opened during the creation of the tutorial.

This tutorial below will review the implementation of Patch Set Exception (PSE) 22506614, which contains three code fixes.

Before we begin, warning: I am an application consultant. However, I do create and install the various EPM products on virtual machines for personal testing and development. 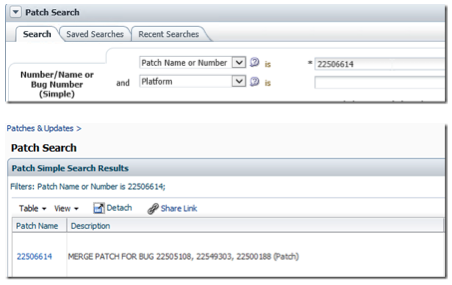 2. Prior to starting the patch process, create a backup of the EPM system to which you are applying the patches. Then, to apply the patches on the Windows operating system, stop the FDMEE service and copy the file downloaded from PSE 22506614 to <EPM_ORACLE_HOME>\OPatch, which based on a default install is Oracle\Middleware\EPMSystem11R1, e.g. C:\Oracle\Middleware\EPMSystem11R1 when installed to the C drive.

4. Start a command prompt and then update the path to C:\Oracle\Middleware\EPMSystem11R1\OPatch.

6. After a couple of minutes, the patch should complete successfully, which is indicated by “OPatch succeeded” prior to the command prompt returning. 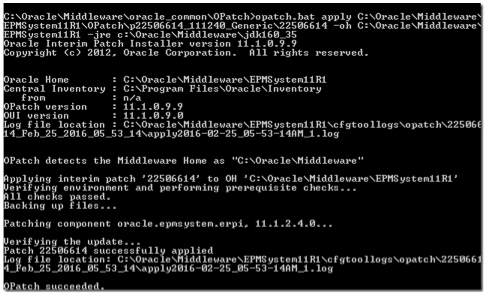 7. Start the FDMEE service and then proceed to Workspace and Data Management (FDMEE) to test the patches.

Table 1 summarizes the Map Type, the Action (Add or Change), what changed, and whether the change is logged.

*To value is not captured with the From

**Listed as “All mappings deleted by user,” as the maps deleted are not listed on the report

In conclusion, the FDMEE Map Monitor Reports are comparable to FDM Classic for the same map types, with the exception of Description changes not being logged in FDMEE for equivalent map types (Explicit, In, Between, and Like). The new FDMEE map feature of Apply to Rules is not logged consistently for all map types, and the logging of MultiDimension map types does not capture changes to Source Values, Condition, and the previously mentioned Description and Apply to Rules. Also subject to change at Oracle’s discretion, i.e. Safe Harbor, additional Map Monitor functionality may be released in the .200 patch for 11.1.2.4.